“Romantic Love will be the last illusion of the old world order,” as
Anna Karenina discovers love, she realizes that there can be no peace as she indulges in the sensual desire that she finds unraveling with Count Vronksky, a doomed love. Set in the late 19th century around aristocratic social structures, Anna Karenina’s theatrical vision is brought on screen; but yet something is missing.

Amidst the spectacular costumes and picturesque performance by Keira Knightly, one can’t help but wonder why did the Russian accents get traded in for a British theme.

Adapted from Leo Tolstoy’s thousand plus page novel, Joe Wright directs and really does a magnificent job accentuating how illicit and immoral Anna’s actions are in society. Especially during the dancing scene between Anna and Vronsky, when everyone continues to change partners and participate in the pleasantries of social dancing, they continue dancing with only each other. The artistic lens of film becomes even more creative as the other guests dancing began to freeze in the background, focusing all attention on Anna’s decision. This in turn creates a public scenario in which they openly accept “there actions” and began the tragic affair. 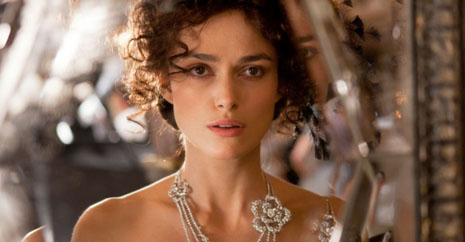 Get inspired by cute little candy, perfectly packed into a bright blue box to delicately tantalize your palette. You immediately jump with excitement because…