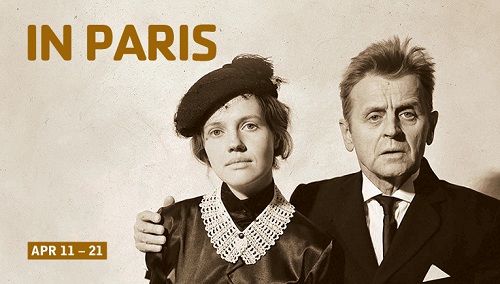 You may be a lover of Paris, but if you’re expecting an extravagant visage of the Eiffel Tower and cute little streets then Baryshnikov’s latest play, In Paris will strike a different chord. The eighty minute play starring Mikhail Baryshnikov is really about the tumultuous times of lonely refugees routed to different European Countries during the Civil War.

Most of the audience slowly scatters into the theater, taking their seat, oblivious to the fact that Baryshnikov has been sitting there all along; perusing the spectators he’s about to perform for. One might question what’s on his mind, the purpose, or if anyone even considers the countless possibilities for taking on this postmodern approach to an audience that barely notices.

Nevertheless,the star of the play sits, silently watching his audiences get settled in, ready for a spectacular. Will they get the little nuances of the play, the histories, and slight innuendoes? Or will it pass over them as quickly as the English translation escapes the dark wall!

First Russian to win the Nobel Prize in Literature, Ivan Bunin’s 1940 short story transcends on stage in an experimental play about a tragic love story involving a writer and waitress who are brought together by their solitary loneliness. The play is attributed by the poetic intermingling of Russian and French and is brought to stage with the grace of Baryshnikov’s original reputation as a world famous ballet dancer. Although you won’t see him twirling throughout, he doesn’t let his viewers leave the theater without impressing upon them a classical foundation which the name Baryshnikov prides itself on.

In Paris will run through April 21 at The Broad Stage in Santa Monica, although at this point getting tickets may be quite the challenge!

Looks like Zac Efron maybe actually be growing up and evolving as an actor. His latest film with Dennis Quaid removes him even farther…