Pre- Grammy week was definitely a Hollywood rush of who’s who among singing sensation’s everywhere. With countless parties and excited stars rushing to make their mark at the annual award show came a pre-weekend of mingling, dancing, and celebration. The Grammy award show featured Black Eyed Peas, David Guetta, Pink, among other rising stars and fabulous outfits that left us thinking did she really wear that!

But before the Sunday night Grammy awards, adrenaline, intermixed with beats was pumping heavily at the Pre-Grammy parties. Thursday night’s pre-grammy Dipdive celebration had the crowd rocking out the Hollywood Paladium anticipating that “tonights going to be a good night,” and it was! Fergie of the Black Eyed Peas performed live with the Black eyed Peas, David Guetta, and countless fans who sang along.

The performances were definitely hot! Starting with Kelis singing her hit “Milkshake” song, as an Avatar. Although she wasn’t a blue Avatar, her costume was definitely inspired by the film. She rocked a completely gold body suit, exaggerated hair extension, minus the 3-D glasses at the Dipdive event. 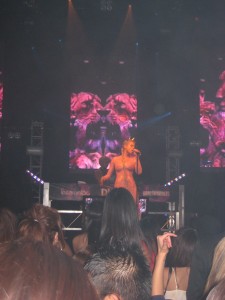 Kelis’s milkshake brings all the boys to the yard was followed by the Black Eyed Peas!

How to Wear Leather in the summer? 3 Factors to consider when wearing Summer Leather!

As we approach the warm end of May, one can’t help but feel the excitement of summer crawling across us in anticipation of the…