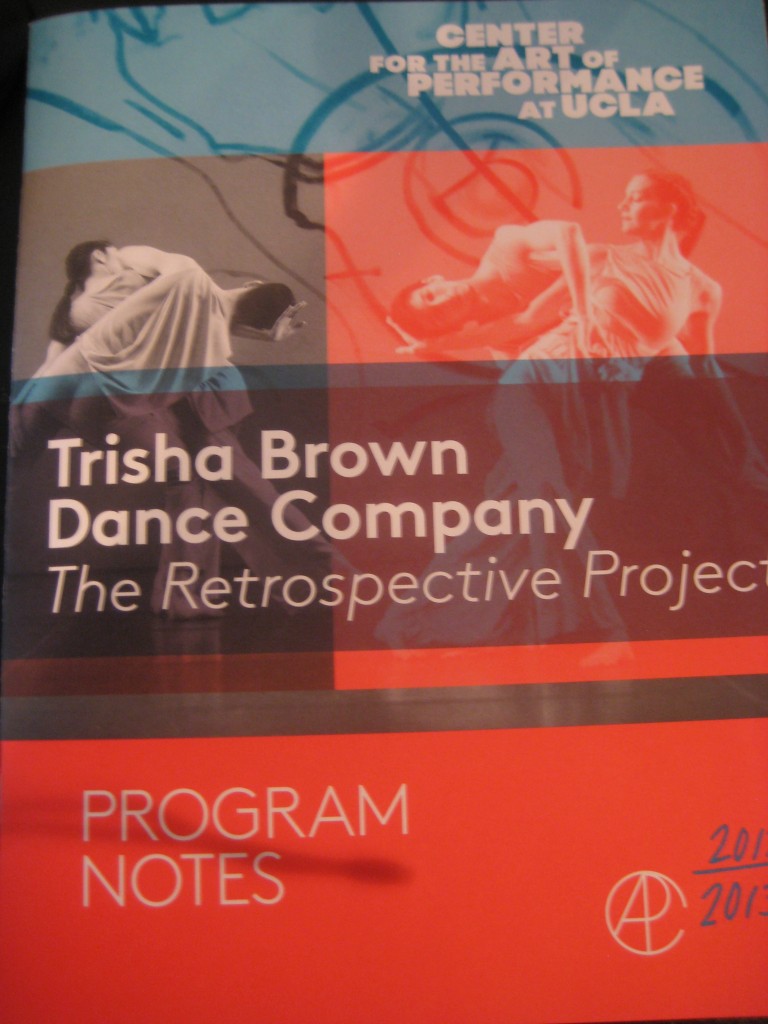 One should not be so quick to judge the slight nuances of dance when it comes to aligning it in a postmodern stature. I just viewed Trisha Brown Dance Company performance at UCLA’s Royce Hall this past weekend and although audience reaction varied it was definitely a very “different” type of experience in viewing dance.

First off, it challenged an audience’s preconceived notion of what constitutes as “dance” and the pleasure associated with watching it live on stage. Rather than indulging the audience in beautifully adorned dance costumes and lyrical music to delight in, Trisha Brown took a very different approach and structured it in a very eccentric manner, from the movements, to the music. The last dance, entitled Newark (Niweweorce) 1987 seems to be intended to move away from the actual dance and provide a theatrical element to the whole experience.

If Trisha Brown’s intention with her dance company was to show audience members that dance performance is more than just pretty songs, it’s about reaching heights of creative infusions that one may not have initially expected; then in a way she has succeeded in her creations. She seems to infuse various viewpoints associated with dance and takes them out of the box they’ve been kept in for so long, in turn bringing a new perspective to the stage. Whether one actually enjoys the performance or is left thinking what was that, they experienced a new view of dance that they may have never knew could possibly exist.

It’s an interesting concept to dishevel, she is inventing knew movements and ways to perceive dance. It seems as though Trisha Brown is engaging in a new level of intellect with her postmodern intentions, however many audience members may not understand it. In the last performance Newark seemed to blur the lines of masculine and feminine as the “identical,” at the same time the audience watched, waiting for something significant, a climax of sorts to take place for the finale, but it never does. In a sense it creates an ending that does not really end; kind of like Samuel Beckett’s Waiting For Godot. It becomes absurd, but it achieves its intention of absurdity.

If you’re expecting to see a Catch me if you can, or Nutcracker ballet type Broadway spectacular you’ll be greatly disappointed and quite surprised!

This is a Postmodern Dance Performance!

4th of July Breakfast of Champions

Just because its fourth of July doesn’t mean you have to indulge in 1000 calorie plus foods. I suggest at least starting light for…